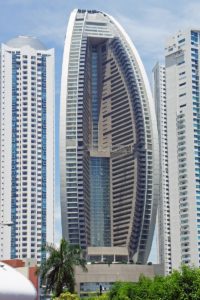 This 284 m building with 70 floors functions as a residential, hotel and casino building. It has 700 apartments, 369 hotel rooms, 1500 parking spaces, 36 retail shops, 10 story office tower and a casino. It is located in Panama City in the area of Punta Pacifica.
Financing of this building was possible thanks to Donald Trump who arranged it. This is why it was also previously called Trump Ocean Club and Trump International Hotel & Tower. Construction started at 2007 and was finished in 2011. 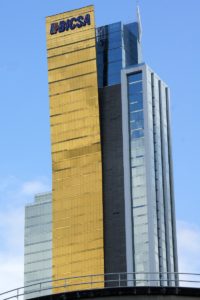 With it’s very unique gold glass color, this previously named Star Bay Tower building, is 267 m tall. It is the 3rd tallest building in Panama City and 3rd in Latin America. The building has 70 floors and is located in Avenida Balboa, Panama City.
This building functions as a hotel and as an office building. It includes 345 hotel rooms and 1400 parking spaces. Construction started at 2008 and was finished in 2013.

The Tower Financial Center which is also known as Tower Bank, is a 55 floors office building. It is 231 m tall and located in the center of Panama City.
This is one of the most unique and distinctive buildings in Panama City due to its black wall façade coating. Construction started at 2008 and was finished in 2011.

This building, also known as the Revolution Tower is an office tower located in the banking district of Panama City. It is 236.4 m high, 57 floors and has 769 parking spaces. Built with a budget of only US $50 million, this building is known for being one of the most iconic buildings in Panama City. Construction started at 2008 and was finished in 2011.

The Vitri Tower is a 75 floor building located in the Costa del Este area of Panama City. It is 280.7 m tall and functions as a residential building. It is also the 2nd tallest building in Panama, 3rd tallest in Latin America and the tallest building in Costa del Este area. All units in the building offer amazing views of Panama City and the ocean, and they have one of the best design feature. Construction started at 2007 and was finished in 2012.

MLS Acobir, is the most preferred property list in Panama and has the largest offer of properties for rent or sale in Panama.

SCAN THIS QR CODE WITH YOUR PHONE

Previous Post
Myths About Renting a Property
Next Post
What Personality Traits Should a Good Real Estate Agent Have?

Why live on Avenida Balboa in Panama?
How to choose a beach property?
How to prepare to make a purchase offer for an apartment or home?
Steps to choose an office for rent

This photo is copyright protected